Staying sane in these insane times. 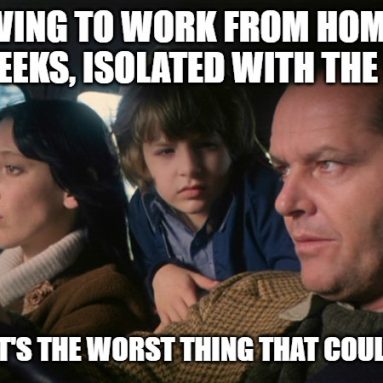 This blog is a part of a series on what we are calling the three ‘anti-virtues.’ In other words the photo negative of faith, hope and love, the three chief Christian virtues and turns them into a dark trinity of fear, hate, and lust. (1st Corinthians 13:13). The last post spoke on fear, recounting the crazy time our family was in the center of the Ebola crisis, and today’s post focuses on hate.

Have you ever thought about the relationship between Fear and Hate?

One of my favorite movies is The Shining. It deliberately blurs the lines between the psychotic breakdown from their isolation and previous baggage and the spiritual darkness that lives in that abandoned resort. The family is already haunted before they even got in the car to make their way for the winter to this place, which itself is haunted. Just like we are.

In the season leading up to Halloween, a lot of people go to Eastern State Penitentiary to scare themselves out of their minds when they have a ‘haunted prison’ set up. The truth is that the history of that prison is truly dark. When the prison was built it was the most compassionate, state of the art prison to date. It was run by a religious group known as the Quakers. One of their foundational beliefs is that people are good at heart.

So they put prisoners with exceptionally heinous crimes for the first time in solitary confinement for weeks. What they believed was that, without the bad distractions from the outside world, with time alone to think about what they did, soon the dysfunctional and dark ways of thinking would flee their minds and bodies. They would be filled with love, and return to the state that God made them for. There ‘inner light would shine,” they would be reformed and rehabilitated.

But as you’ve heard, the road to hell has been paved with good intentions. Instead what they found is that these prisoners descended into madness the longer they were in isolation. Instead of an inner light, the darkness consumed them.

In the way that faith is the flower, and love is the fruit. Fear is like a hideous alien that is freakishly born pregnant with hate the moment it comes into your world. How can you love your family when you are isolated from them in these weeks to come? If you don’t fix where you are placing your faith, you won’t be able to bear the fruit of love.

This is an opportunity to place your faith, not in your ‘tank’ of generosity and goodness. Some of us already know our upbringing didn’t prepare us well for this, while others are hanging on to the fairy tale that we are basically good, as long as everything goes relatively good for us.

Well, it’s not going good for us now, but can we still be good in our souls? Place your faith in Jesus, and you will bear the fruits of hope and love. When you place your faith in Jesus, the first thing you do is admit your sin. You no longer can hold anything over anyone else’s head. You are deeply convicted of being impatient with your kids, with your spouse, with whoever you are living with because you know that God has been endlessly patient with you.

Even when you know who you are in Jesus, which is both loved and forgiven you will still struggle to love your family. This is because like the prison, and like the isolated resort portrayed in the story of The Shining, your battle is not just a mental one, but a spiritual one. Hate comes from hell, and your only hope in the battle against, not only yourself but unseen forces around you is to stand on God’s promises and fight back with faith in prayer.

To sum this all up, if you want to keep your sanity in these insane times, don’t put your faith yourself, don’t put it in the governments’ response or anything other than the one who holds the future in His hands. It will not be enough to simply have faith that you are not good enough and to admit that you need the forgiveness and love of Jesus. Your mind may become clear but you still live in that haunted house, along with others with all their baggage, getting on your nerves as well. If you want to replace hate with love, it is time to get on your knees, and stay on them in prayer for help and power, because you are fighting an unseen battle.