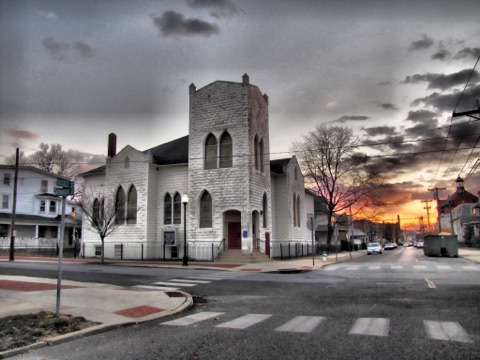 Because although Gloucester’s nicknamed ‘the holy city’ the town it once was, filled with churches bursting with people is in the past.  Because God chose to send His son to be raised in a small declining racially mixed town called Nazareth, under the care of a foster dad named Joseph, a carpenter that everybody would be quick to write off.  We believe there are no insignificant places or people.  Because neither we nor God is intimidated in the slightest by the brokenness that exists in a lot of lives (including ours) or even sometimes the apathy we can have towards Him.

Because we just love this City and this area, want to raise our kids here, celebrate and strengthen the many good things going on here.  Because God cares about Gloucester City, longs for more people to come to know Him.   We also long to be a people in the community, for the community, showing off the love of Jesus in all kinds of ways.

The kind of Church that exists for people who don’t necessarily see themselves as Church people.   The kind of Church where it’s okay to belong while you are in a process if figuring out what you believe. The kind of Church that’s grounded in the Holy Scriptures, and unashamed of God’s free grace in Jesus over any of our efforts.  A Church that is always seeking to remove barriers that don’t matter, that seeks to love well, serve the community but is absolutely committed to great depth in God’s word.

Ultimately the kind of Church made up of residents new and old that are learning to love like Jesus, and specifically want to celebrate every good thing already happening and fight for more in Gloucester City and the surrounding towns.

We are a Christian Church that holds the Apostles Creed as the essential teaching of Christianity along with every other major branch of the faith.  We hold on to the well-known motto “in essentials, unity; in doubtful matters, liberty; in all things, charity.”

More specifically we are a Reformed Congregationalists church.

As a Reformed Church, we hold to a high view of the scriptures as both sufficiently clear on its own and absolutely necessary to know God and His salvation.  We also make a big deal about God’s role in everything from salvation, to every aspect of life.   To understand better our distinctions and tradition, a good fleshed out summary of the faith is found in the Savoy Declaration (1658 AD).  We use the helpful website and app (for IOS and Andriod) at NewCityCatechism.com which is an updated tool to help teach the reformed faith.  Even better is to come worship with us.

As a Congregationalists Church, we have a high view of personal conscience as well.  We believe that each church should be led and ruled by the Lord directly (rather than by a court, a bishop or some other authority structure), and has the freedom to serve the Lord in a variety of ways.  We don’t see the diversity of the Church as a necessarily bad thing, but as the word of God tells us, we do believe that those in Christ are many members of one spiritual body.

We are a part of the conference that allows for diverse practices and beliefs, and yet requires its ministers to hold to essential Christian teaching and ethics.  Click here to find out more about our conference, it’s beliefs and positions.

Here below is what we believe is Christianity 101, the essentials.

I believe in God, the Father almighty,
creator of heaven and earth.

I believe in Jesus Christ, God’s only Son, our Lord,
who was conceived by the Holy Spirit,
born of the Virgin Mary,
suffered under Pontius Pilate,
was crucified, died, and was buried;
he descended to the dead.
On the third day he rose again;
he ascended into heaven,
he is seated at the right hand of the Father,
and he will come to judge the living and the dead.

I believe in the Holy Spirit,
the holy *Christian Church,
the communion of saints,
the forgiveness of sins,
the resurrection of the body,
and the life everlasting.

*Or ‘catholic’  meaning the Church that preaches & practices the same essential truths through the ages, and in all places.  In other words, not in one particular sect.