The insane week we had Ebola 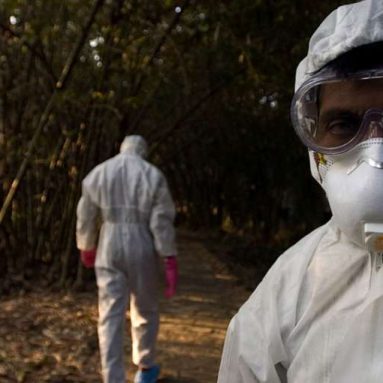 On the anti-virtue of fear.

We came home from Rwanda for a few months in 2014 as missionaries for a time to reconnect with family and be ‘invisible’ in our home country, but that was not in the cards for us!

If you google ‘Maple Shade Ebola’ you will find 128,000 results. You will also see articles about it from local news stations like Actions News all the way to international news agencies like the BBC, CNN, and France 24. Yes, in the middle of that “ebola mania’ it was our family that came under the international spotlight, though our identities were never revealed. Not only did our family anonymously become the “Ebola scare of the week” on the news, our case affected international politics as an ebola free Rwanda, decided to impose a visa fee on American visitors for the first time and to check American’s temperature three times a day for 21 days, since ‘technically’ America had cases of Ebola. That was an interesting year. In America and then back in Africa, there wasn’t a day we did not hear about it, even deep in the village where there was no TV people knew about the Rwandans whose kids were not allowed to go to school in New Jersey.

The interviews shown on TV were not flattering of South Jersey, but it was the comment sections, and the overheard conversations at the WAWA and other local spots that was straight up as racist, and ignorant as you can imagine, even getting to the point where people threaten this “Rwandan family” with violence if they tried coming into the school.

We could have tapped out in a bunch of ways, but we didn’t. There were generous offers for our kids to go to a private school. There was also the idea that it could be leaked that this ‘Rwandan family’ are actually missionaries, and that my wife and I where married right in that town. Should our race and the reason we were in Rwanda matter? You know the answer.  Invisibliity isn’t even an option for many minorities in majority spaces.

FEAR is a terrible thing, and we are seeing it raise it’s ugly head now with this coronavirus. I was reminded of this when my friend posted the experience of his parents. When it comes to our family and especially our kids, fear go into hyperdrive. But we must resist.

At Epiphany, we like to talk about the three chief virtues of a Christian, which are Faith, Hope, and Love. Sadly in the culture and in the Church, we have distorted these virtues into ‘anti-virtues.’ Instead of the three virtues, we find from the Apostle Paul in 1st Corinthians 13, we feed on fear, hate, and lust like a starving chained up pitbull in a junkyard .

I am going to write about these anti-virtues in the weeks to come but today I just want to encourage to ask yourself what good comes out of stoking fear? Yes, that is what sells, that is what gets attention, that is what seems to motivate so many religious and so many irreligious people. True Faith is not your grandma smacking you with a Bible till you ‘fall in line’, True Faith is full of curiosity and courage. The soil where real genuine faith grows that isn’t fake is a soil where you can ask questions, where you are allowed to have doubts, and where those doubts are addressed thoughtfully and lovingly. Authentic faith also blossoms into courage, it isn’t cursing at the darkness, at the big horrible word. True faith doesn’t care about, need or even want whatever ‘cultural power’ the Church had in the past because it’s not about comfort or power. True faith is at peace because it’s hope is not in being in the majority, but being in the truth.

So I encourage you to consider what news you listen to, consider how much you listen to your friends, and ask yourself, do they stoke the fires of fear, hate, and lust or do they stoke the virtues of Faith, Hope, and Love.. If we are honest with ourselves, especially as we look at the Church, so much of what we see doesn’t make us more like Christ, but less.

Let’s wash our hands, get our facts right, and love our neighbor, wherever they are from, and whatever they look like.

POST SCRIPT: CORONOVIRUS IS WAY MORE CONTAGIOUS THAN EBOLA (AND WAY LESS FATAL), THE PRINCIPLE OF THIS BLOG ARE THE SAME, LET’S REJECT FEAR AND HATE. HOWEVER IT IS WISE TO BE PREPARED AS POSSIBLE. SO PAY ATTENTION TO LOCAL AUTHORITIES, BUT TAKE SOME OF THE THINGS YOUR FRIENDS SAY WITH A GRAIN OF SALT.